Serene 2BR, 1BA mid-century modern home adjacent to miles of hiking trails and solitude in the Berkeley Hills. Representing the epitome of California indoor/outdoor flow, the home was designed with large picture windows along the interior blurring the lines between the home and nature. The living and dining rooms feature original random plank hardwood flooring, along with French doors to the back yard. The light-filled eat-in kitchen includes a bonus area for a potential home office or homework area. Down the hallway, the first bedroom maintains its original charm with hardwood flooring and knotty pine walls. The primary bedroom at the rear of the house overlooks the garden, and also has a sliding door onto its own private sitting area looking out toward Tilden Park in the east. The bedrooms share a hall bathroom, which has been updated with a double vanity, new tile flooring and water-saving fixtures. The large garage provides opportunity for additional storage, or even a potential art studio. Relax with a book and cold beverage under the multiple maple trees in the private backyard, or meander the paths around the property. While being surrounded by nature, the property is still conveniently located close to UC Berkeley, North Shattuck restaurants and Solano Avenue, while also being accessible to the East Bay and beyond with AC Transit on the corner. 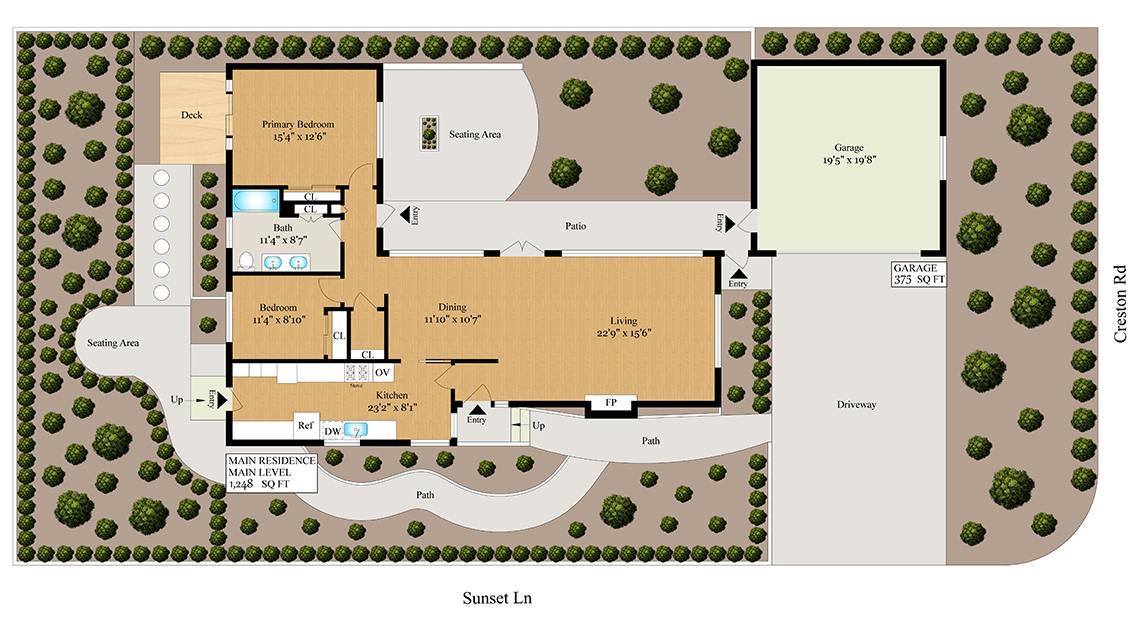 The home is surrounded by nature, while also being conveniently located near UC Berkeley, North Shattuck restaurants, Solano Avenue, hiking and biking in Tilden Park, and AC Transit to downtown Berkeley or San Francisco Transbay Terminal. Most residents regularly visit the expansive trails in the area, as they provide hill crest views of expansive forest to the east and one-of-a-kind three-bridge views to the west.

Today, UC Berkeley is one of the world's top universities. The Gourmet Ghetto, inspired by places like Chez Panisse, Cheeseboard Collective and Peet's Coffee, is a premier food destination. Brilliant masterpieces from architects Bernard Maybeck and Julia Morgan abound. Coupled with its natural amenities, Berkeley is one of the most desirable places to live in the US, if not the world!